How to Train a Rottweiler Puppy – For Beginners

How to Train a Rottweiler Puppy 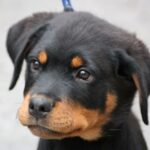 Before I teach you how to train a Rottweiler puppy in the basics, you need to understand this breed. Though a Rottweiler is not the best breed to own for a first-time dog owner, arming yourself with proper training techniques and resources will make owning one a joy and a breeze.

Origin of the Rottweiler

The Rottweiler is a working-class dog. “Working” just means it was bred to do a specific job.  In Rottweiler’s case, his job is to guard and protect. That’s his instinct.  Despite its bad rap, the Rottweiler is a very loving and loyal dog to the very end – if properly socialized. 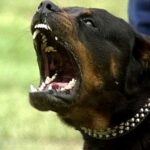 The Rottweiler puppy very quickly grows into a muscular, strong and robust dog.  This puppy is extremely powerful and intelligent too.
A Rottweiler puppy can make a good family pet, but because if its size and strength, can be a challenge for a first-time dog owner.

The biggest reason you need to learn how to train a Rottweiler puppy in the basics is that if you don’t, he will become aggressive and unpredictable – 2 very bad combinations for a dog that massive.

1.  Establish Yourself as the Alpha

Learning how to train your Rottweiler puppy starts with establishing yourself as the Alpha. How do you do that? Easy. Let me explain. Dogs run in packs.

And every pack has a leader.

All the other dogs obey the leader of the pack. The leader is referred to as the Alpha. So in the wild, the Alpha eats first and gets the best selection of food.

The Alpha’s sleeping quarters are also perched high above the other dogs so that he can look out over the pack’s territory and surrounding area.

The Alpha dog is the decision-maker of the pack.

How Does Being The Alpha Help You Train Your Rottweiler Puppy?

It’s critical that you be seen as the pack leader and that your dog sees himself on the lowest rung in the pecking order of your family. Your puppy should see himself as subservient to you in order to foster a healthy relationship between you and your family.

Once this pack order is established in the home, your Rottweiler puppy will happily obey orders and be much more responsive to training.

2. Don’t Play Games of Strength With Your Rottweiler Puppy 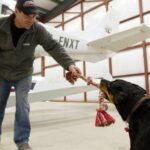 While it may be tempting to play a friendly game of tug of war or roughhousing, this will encourage aggressive behaviour.  Your Rottweiler will quickly learn to challenge your authority. It can also quickly turn the playful situation into a dangerous one.

Instead, play a game of “fetch” which gives your dog the instant gratification he seeks since he loves to run and is full of energy. He’ll appreciate the attention, and the exercise will help him burn some energy.

3. Train Him to Sit, Stay, Come, and Not to Pull on the Leash 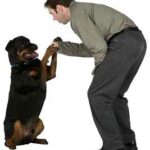 How to train a Rottweiler puppy begins with teaching him the very basics and then moving on to advanced training.  I have to warn you first though:

These are some helpful links and topics to help you learn how to train a Rottweiler puppy in some of the basics and advanced commands like:

Lastly, socializing your Rottweiler on a regular basis is one of the most important things you can do when learning how to train a Rottweiler puppy.  Take him to the dog park.

Or, take him to cageless doggy daycare.  If you can’t afford doggy daycare, have a dog walker come to take him out at least twice a day for an hour each time.

For more on in-depth dog training and house training, get The Dog Training Mastery Multimedia Package by Kingdom of Pets.