An Aggressive Greyhound and Family Interaction

Greyhounds as a breed are not known overly aggressive, however, on occasion, you may hear of a greyhound behaving aggressively.

What Makes a Greyhound Aggressive?

Although most people think of racing when the greyhound breed is mentioned, greyhounds were originally bred for hunting. Their incredible speed enables them to outrun their prey. They are pack oriented and usually do well with other dogs their size. 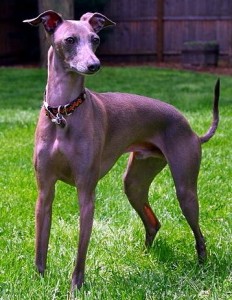 However, they cannot always be trusted with animals smaller than themselves. They have a strong drive to track down prey and will often run after cats, small dogs, or other small animals. An aggressive greyhound has a stronger prey instinct than others.

Greyhounds Always Need to be on a Leash

When outside, greyhounds should always be on a leash. Many states require that the dogs also be muzzled when outside. Greyhounds are “sight” hounds, meaning they hunt by sight, not by scent. This characteristic makes it almost impossible to control an aggressive greyhound if he sees prey and is unleashed.

If your aggressive greyhound is a retired racer, he may never have had contact with animals aside from other racers. He may chase smaller animals out of curiosity, fear, or instinct.

Are My Small Children Safe?

Yes. Greyhounds are extremely intelligent, docile, and willing to please. They are not normally an aggressive dog, with the possible exception of small animals that run. When socialized, they are very friendly with family members.

As with any breed, greyhounds should be supervised when small children are present until the dog accepts your child as part of his “pack”. Even then, as with all dogs, dog and child should not be left unsupervised for long periods of time.

While many greyhounds chase cats and other small animals when outside, most greyhounds will settle in very well with other animals inside the home. An aggressive greyhound will need to be socialized with family members and that includes other pets.

How to Socialize a Greyhound

Greyhounds can be socialized using short controlled encounters with furry members of the family. To keep animals separated, you may use baby gates or crates.

Another method is to leash and muzzle both animals for the initial meeting(s). Some dogs will not show any signs of aggression in this first meeting while others may need a bit more time in socializing.

Even if your greyhound does not show any initial signs of aggression with smaller animals inside the home, encounters between them should be fully supervised by owners for some time.

Gradually allow trust to build until the greyhound accepts other furry members as his “pack”. Once an aggressive greyhound recognizes family members and other animals as a “pack” member, those specific animals will be safe from harm.

What Kind of Dog Training Guide Should I Get?  Do I Need to Exercise Him Every Day?

No. Greyhounds were bred for short sprints of speed, not endurance. Your greyhound will be happy with his leashed walks every day and whatever exercise he may get from a fenced in yard or playing in the house.

If you can get him to a fenced ball field or park once or twice a week for a good run, that is all that is required of this breed.  For more ind-depth, step by step greyhound dog training, I highly recommend Secrets to Dog Training.